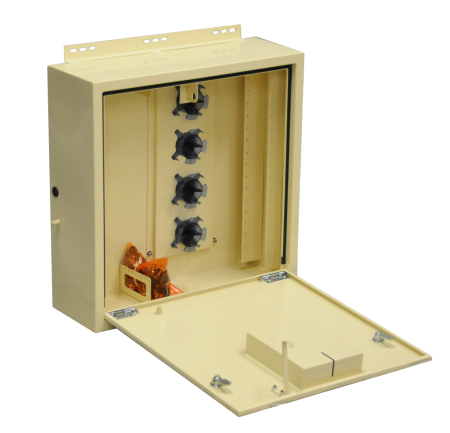 Multiple IPS safes that housed classified equipment were deployed on an American military base; however, to create a proper networking infrastructure, holes would have to be drilled in the safe to accommodate conduit. Drilling holes would compromise the security and integrity of the safe. Together, Great Lakes and this military customer discussed how the network infrastructure could be installed so that the safe remained “safe” and any installed network equipment could be accessible when needed.

As the type of equipment expanded in the safe, multiple conduit knockouts would need to be “drilled” in the safe to accommodate cable routing; this would essentially deem the safe useless, as it would no longer be a completely secure enclosure. By using the Great Lakes Secure PON Enclosure, it allowed the customer to run multiple conduits or flex connection securely into a unit and transition into a combined unified pathway into the safe. It also provided a patching location to reduce the amount of cable routing into the safe. Any equipment requiring maintenance or replacement would be done at the zone enclosure and not the safe, thus reducing the number of individuals who would have access to classified equipment in the safe.

In addition to helping maintain a protective environment for IPS safes, the PON enclosure also helped reduce expenses for the customer. By relocating all of the cross connection panels to a PON enclosure, the size of the IPS safes could be smaller, resulting in reduced costs for the safe and its installation.