Never mix old and new batteries–it’s a guideline on the package. Sometimes though, mixing old and new is acceptable. Deploying new Great Lakes enclosures alongside legacy enclosures from another manufacturer was not as cumbersome as one data center manager initially expected. During a data center upgrade, ES enclosures were installed adjacent to legacy enclosures which created two complete enclosure rows. Custom products were manufactured so that overhead panels could be installed and a containment solution could be implemented. Over time, as the need for security within the data center evolved, the physical enclosures were continuously updated to include increasingly more intelligent and flexible access control solutions.

Great Lakes enclosures in the containment aisle consisted of locking swing handles while legacy enclosures featured a simple pull handle with adjacent key lock. In order to maintain compliance with regulatory laws, the risk assessment group of the data center proposed the use of more secure handles on all enclosures in the containment aisle. After comparing advantages and costs of various solutions, an end-of-row biometric reader was and corresponding access control handles were installed on the front and rear of every enclosure. The handles on Great Lakes enclosures, which utilize an industry standard handle cutout, were easily swapped;  however, legacy enclosures did not have a cutout of any sort. Great Lakes developed a custom door frame adapter to mount on the front and rear of the enclosure so that Great Lakes doors could be hung. Not only could new handles be installed, but each enclosure featured a Great Lakes profile which gave the row an aesthetically pleasing look. The end-of-row biometric reader featured 3 factor authentication (biometric, RFID, and PIN) that provided control over the newly installed security handles. From a single point, access control settings could be implemented, while limiting the amount of hardware that needed to be installed in each enclosure.

As time progressed, the company and data center were required to adhere to increased security standards. Based on these standards, the data center manager decided to remove the end-of-row biometric reader and install biometric handles on all enclosures. Several controllers and their associated cables were installed in each enclosure. With these new cables came a need to hide the cables to protect them from tampering or accidental disconnect. New secure contour mesh doors (installed on ES and legacy enclosures) featured security channels along the inside perimeter of the door that safely fed the cable from the handle to inside the enclosure. After handle installation, the biometric software was configured to integrate with the company card access system so that all security measures of the entire building, not just the data center, could be monitored 24/7 by the company security team.

For more information on Great Lakes security solutions and access control options, please get in touch: 1.866.TRY.GLCC or glcc@greatcabinets.com 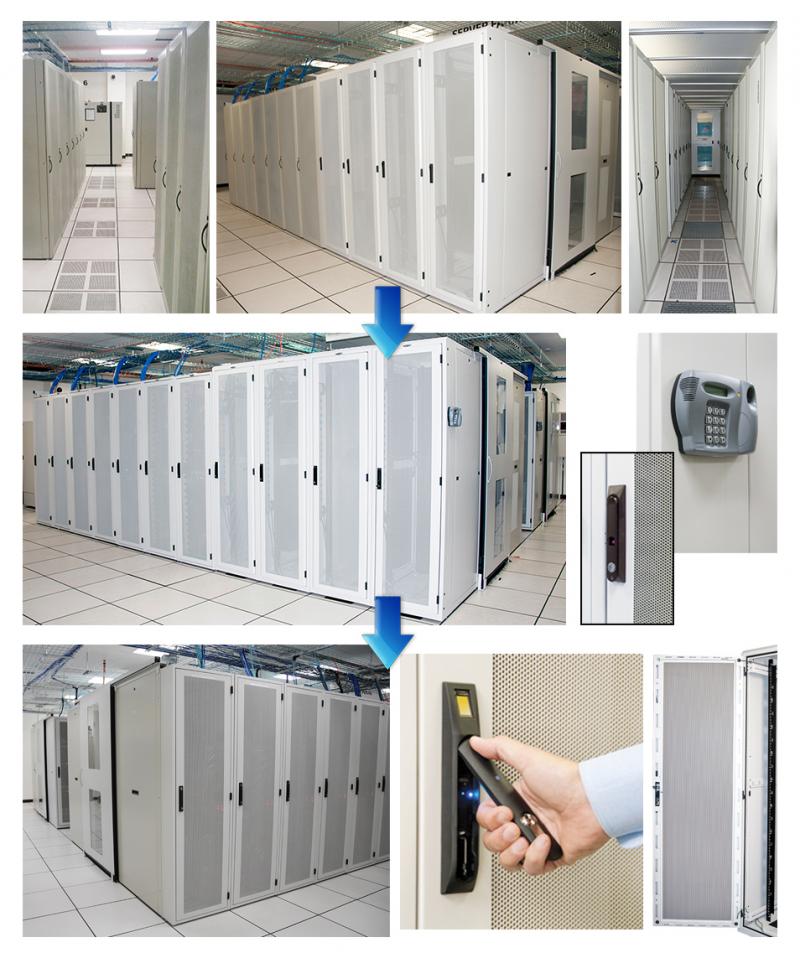